The CCGL wrapper eases the use of Cinder within a typical Cocoa project for Mac OSX. Thus allowing C++/Obj-C creative coders to build Mac apps bearing several Cinder sketches within the same app, as well as Cocoa sliders, buttons... as further introduced in this article.

Download the CCGL examples package. Unzip the file and place the "CCGL" folder you obtain at the root of your Cinder folder, besides "samples", "blocks", "lib"...

Within the CCGLBasic project folder, open CCGLBasic.xcodeproj and run it: the project should build and the CCGLBasic Window should appear with a colorful, rotating cube whose size you can adjust with a Cocoa slider such as illustrated here under. 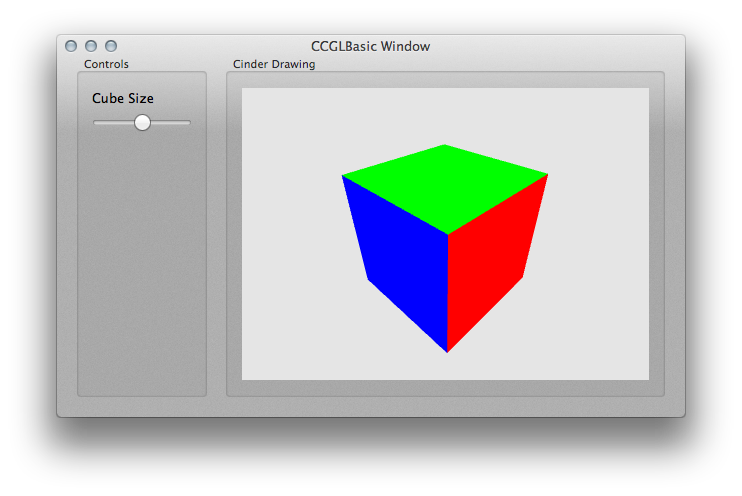 First navigate to XCode.app within the Applications folder on your Mac, right-click on it and select 'Show Package Contents' from the context menu. Then take a deep breath, and place the templates' *.xctemplate that you've previously downloaded folders there:

Phew. You're ready. Launch XCode, create a new project and select the template of your choice from the MacOSX > Application menu. Make sure to save the project's folder inside of a folder (ie. "MyCCGLTouchProjects") at the root of your Cinder folder. 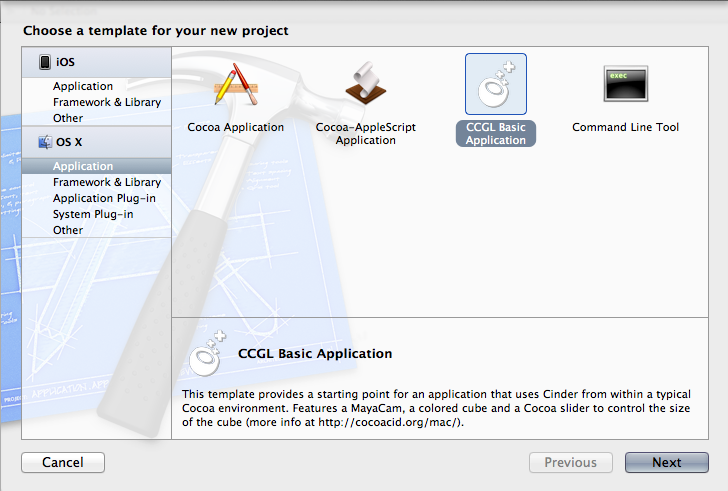 ▸ A brief note about the files and their roles

Unfold all the groups in the project's hierarchy in order to get something similar to the image on the left.

In order to use the Cinder framework within a typical XCode project, it is necessary to go around the application building process that magically happens when rendering a Cinder project. In other words, replace the AppBasic class, from which all Cinder MacOS projects inherit (ie. class MyGreatApp : public AppBasic ...), with a combination of an OpenGL capable view that is added through Interface Builder and that is bound to a class inheriting Cinder capabilities.

The OpenGL capable view that is used here is unfortunately NOT an NSOpenGLView as the name would clearly suggest. Instead, it's an NSCustomView, and you'll find it in the MainMenu.nib file (that's in the "Assets" group) displaying the name of the class that's telling it what to do.

Indeed, this NSCustomView is bound to the MyCinderGLDrawing class, whose .h and .mm files are placed in the "MyClasses" group (Why .mm ? Because it's an Objective-C++ file, that welcomes Obj-C syntax as well as C++ syntax. More on this in the next paragraph.).

The MyCinderGLDrawing class may bear any name you like. That is where you're going to write what's being drawn in the NSCustomView. But it must inherit from the CCGLView class whose .h and .mm you will find under the "CCGLCore" group. Everything in that CCGLCore group should remain intact unless you want to implement new functions, or tweak the defaults... at your convenience.

Finally the MyController class, whose .h and .mm you will find in the MyClasses group, is the place where all the Interface Builder buttons, sliders, etc. that you've added in the MainMenu.nib are being connected to the CCGLView(s) that you're willing to control with them. For clarity, in all the examples provided in the CCGL package, MyController inherits from NSObject (and displays as a blue cube in Interface Builder, where you get to connect IBOutlets and IBActions). It happens sometimes that you'll be better off extending NSWindow. That's obviously possible. Also, as with MyCinderGLDrawing, MyController may bear any name you like. And you may use as many controllers as you care to.

▸ What examples are there?

Apart from the CCGLBasic example described up there, 10 other projects are available in the package:

Made with the wrappers